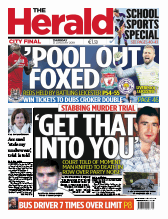 The Evening Herald newspaper archive 1891 to current available on Irish Newspaper Archives. The Evening Herald is one of Ireland best known newspapers. From its very first edition published the 19th December 1891 The Evening Herald set itself apart from other titles at that time. Proclaim that the paper was there fight for the independence of Irish men and women,

The fight which the Herald spoke of was of course; Home Rule for Ireland. During the time of the Herald’s first publication Ireland was undergoing a major political upheaval and social uncertainty. The Heralds first edition went on to proclaim

The Herald as it is commonly known today is a national newspaper owned by the Irish Independent Group of newspapers and has continued since 1891 to have a nationwide circilation althrough the paper is heavily assocaited with County Dublin. The Evening Herald is an essential newspaper for Irish hisotry and geneaolgy. Through this vast newspaper our members will be able to gleam insights into Ireland's great past and throgh the full colour PDF images get access to the socaial and cultural changes taking place in Ireland in more modern times.

Use the blue arrows below to view the available years: