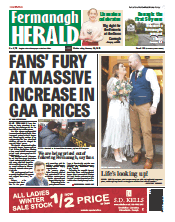 Please view below for available years

We would like to thank the Waterloo Directory for assisting with the history of this newspaper.