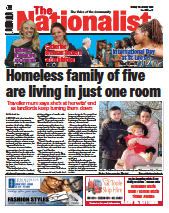 The first edition of The Carlow Nationalist and Leinster Times was published on Browne Street, Carlow in 1883. This historic newspaper has been reporting on regional and national events for over 134 years. To do this day the Nationalist & Leinster Times has the largest circulation of any newspaper title in Carlow. The full newspaper archive is now available for searching through the Irish Newspaper Archive gateway.

“The want of a National Newspaper for Co. Carlow and district has long been felt and it is believed, by the most competent to form an opinion, that the establishment of such a journal should no longer be postponed. The rapid development of National aspirations in the past few eventful years renders it imperative that popular organisations should have representative and independent mediums, through which a bond sympathy, union, strength, may be created, perfected, and maintained, for the accomplishment of those objects on which Irishmen have set their hearts.”

“Local organisations is now acknowledged to be a powerful factor in bringing to a successful issue our struggle for liberty.

The Carlow Nationalist & Leinster Times prospectus further goes on to align its aims with Catholic principles and advocates Catholic rights. At the time of the Parnellite 'split' (1890s) "The Nationalist" espoused the anti-Parnellite cause.

The Nationalist newspapers offer a vast opportunity for genealogical research with the Carlow Nationalist & Leinster Times Obituaries reaching back to 1883.