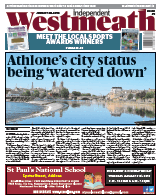 The Westmeath Independent was established in 1846 and 170 years later is still going strong. The founding managing director of the firm was Mr. Thomas Chapman.

The Westmeath Independent circulated in Westmeath, Roscommon, Longford, Meath, King's and Queen's Counties, Galway, Mayo, Sligo and Leitrim. There were many changes to the titles subtitle 1847 the

During the 1920's the newspaper published the following remarks “English Rule is broken in Ireland. No English policies, good or bad, will stand. The Irish people will govern themselves”. Remarks of that calibre ensured that for months later, the Westmeath Independent itself was the cause of the most exciting news story the paper ever carried.

October 1920 the printing works was attacked by the Black and Tans. The papers founding member, Mr Thomas Chapman was unwell when the attack took place and as the flames engulfed the printing works it was left to Mrs Chapman and their maid to tackle the blaze. Due to a strict curfew enforced by the Black and Tans the towns people dared not leave their homes to help in fear of been shot.

Mrs Chapman managed to keep the fire under control until the works manager arrived the next morning to relieve her. The two ladies were heralded as heroes by the town.

Despite the partial wrecked building the Westmeath Independent came out as usual. Tom Chapman’s health never recovered and passed away in 1922.