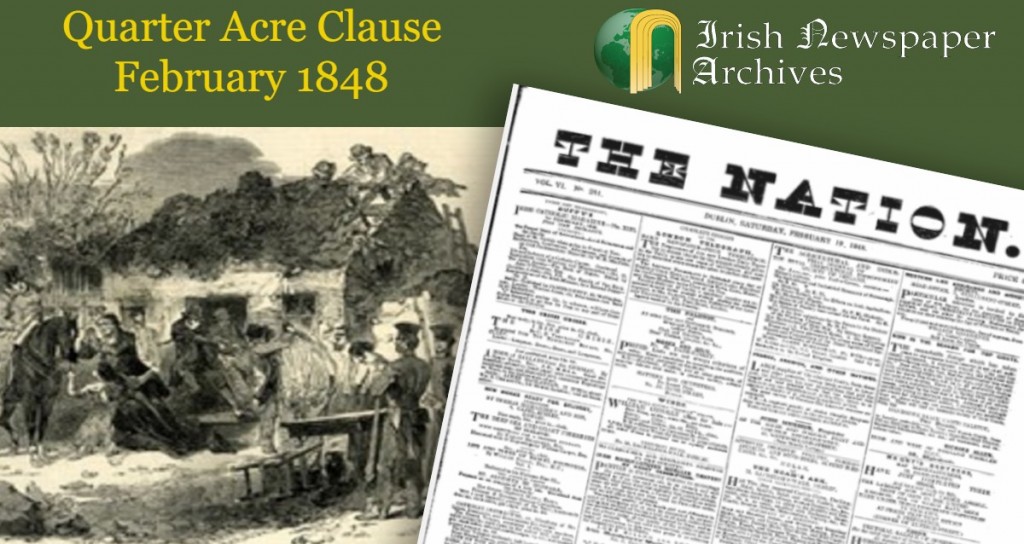 In 1848, following the introduction of the Gregory or Quarter Acre Clause eviction in Ireland continued unabated. The Irish Famine Eviction Project lists close to 1,400 sites of eviction. More are still being uncovered including those which took place in February 1848. At Lisgeady, county Galway according to the Tuam Herald, six families, were evicted from their homes on an estate owned by Mr Lynch. In Waterford, near Lismore nine families, numbering fifty-eights people, were evicted from Ballyduff, from the Woods estate. Wood was a native of Cork and offered little sympathy to the plight of the evicted. According to reports there were more than 400 families destitute in the Lismore area. These probably included 113 people evicted from the property of Captain Barry. In the previous year large scale evictions had taken place on the Ballysagart estate owned by the Kiely Usher family where 280 people were left homeless in one day. Reporting on these evictions, the Nation newspaper also commented on a host of other incidents which were occurring during the Famine.  In Bandon, county Cork a poor man died on the main street of hunger and despite the best intentions of onlookers nothing could be done to save his life. The severity of the times was also obvious in the number of attempts on the lives of landlords and their agents including the foiled attempt to shoot the Earl of Erne in county Fermanagh and Frederick Mason in county Kerry. In Ennis, county Clare a man named Torpy was arrested posting threatening letters on the doors of houses threatening landlords and their agents that they would be shot. Download Source: Nation 1842-1897, 19.02.1848, page 5