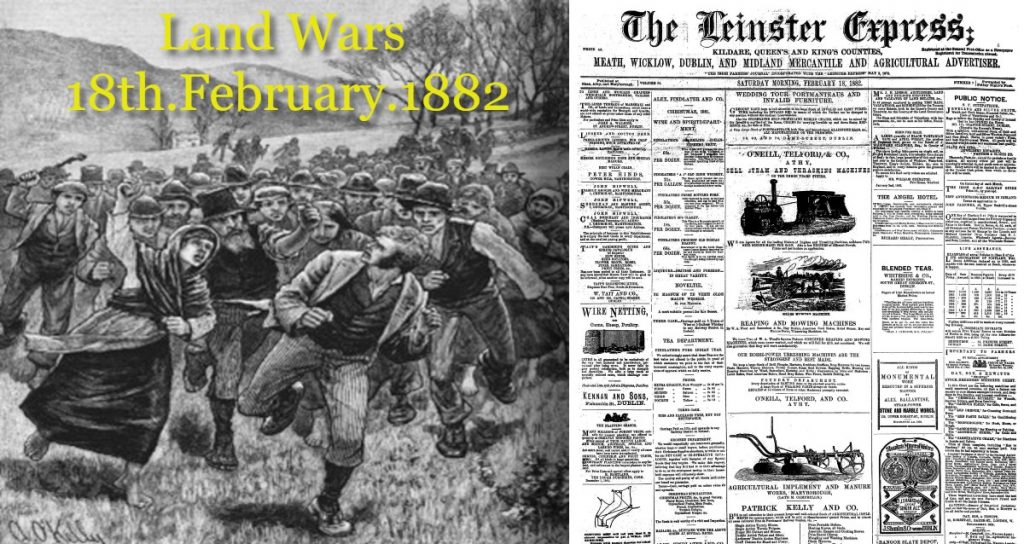 Entering its second year, the Land War and its repercussions were being severely felt all across Ireland during February 1882. No town or village escaped the ever present violence which pitted landlord and tenant in battle. At Edenderry, King’s County (Offaly) a man named Smith was shot at and injured after he had taken over land which was being ‘boycotted’ by the local land league branch. Likewise, in Kilfinny, county Limerick  John O’Brien was shot at by two men who were concealed in a ditch. O’Brien’s crime was that he was ploughing land from where an eviction had taken place. In Ballycumber, King’s County three houses were set on fire, one of which belonged to a local process server, a detestable occupation during the Land War. In neighbouring Tullamore a house was burned; the culprit it was believed was embroiled in legal proceedings with the occupant of the house. At Swinford, county Mayo an attempt was made on the life of Francis Mullholland, an estate bailiff. Mullholland was due in court to give evidence against a number of tenants who were to be evicted and it is believed that the assassination attempt was to prevent him from doing so. At Ennis, county Clare Wilfrid Lloyd a Resident Magistrate was shot at as he was accompanied on his duties by the police, one of whom was seriously injured. One of the tactics adopted by the Land League was to encourage tenants to withhold the payment of their rent, something which it was hoped would frustrate landlords. In county Tipperary the fictional ‘Captain Moonlight’ offered rewards for information about those who had paid their rents on the O’Brien and Smith Barry estates. Source: Leinster Express, 18 Feb 1882, page 6 . 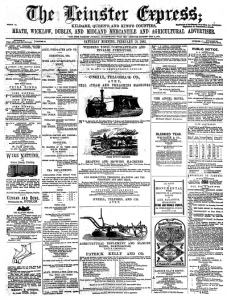 Twitter: February in History: Reports of crime & outrage across #Ireland during the Land War of the 1880s #genealogy #irishhistory